They knocked on our cabin and identified themselves as Hungarian Passport Security and asked for our passports. We’re about to enter non-EU country Croatia. I only found out that this train route passes through Croatia from the 3 other passengers sharing my sleeper car. They’re going to Zagren, the capital city of Croatia. I was on my way to Venice, Italy. What the hell, in Budapest

The Hungarian border police stamped exit on my passport despite my telling them that my destination is Italy. Like half of the Hungarians I’ve encountered since I came to Budapest, he went on as if he heard nothing.

A woman came and said she’s the Croatian Passport Security and asked for our passports. I handed her mine and explained that I’m not getting off at Zagren but in Venice. Like the Hungarians, she wasn’t listening.

“Philippine. No visa.” Yeah, she called me by my country. And the other girl in my car, she calls her Malaysia.

“No, because I’m going to Venice.”

“You need a transit visa.”

“I didn’t know this train is going through Croatia. I’m not going to Croatia.”

I had an invitation to visit Croatia and had wanted to go, but gave up because of the visa that I needed to get. Just then a guy identifying himself as Croatian Custom butted in,

“the next stop is Croatia. If you not going to Croatia, you get out here.” He f’kin heard me. I wasn’t even talking to him.

Everyone in the cabin started talking on my behalf. We’ve gotten along quite well the past 4 hours. I was actually very touched they try to look after me. The boys helped me with my bags when I finally gave in and went down. The woman went missing with my passport and “Malaysia’s”.

Then I saw 2 Asian girls who must be in the same predicament walking towards me. I thought they’re Filipina, but are Thais on their Euro holiday. It was a big deal for me to have them there as ally and backup. We became really good friends after this. The police that threw them out of the train didn’t even explain why. Just said to get their bags and off the train. I had to explain to them what’s happening. They later thanked me that they would have been so scared if I weren’t there. I was not scared, I was more pissed with everyone’s mean and rude attitude in Hungary and Croatia border. I was also thinking of the 65euro (19,320ft) I paid for the train ticket and the expensive B&B reservation I have in Venice that I don’t think I can cancel. Or that if I could claim these against my travel insurance or the Travel Inconvenience Benefit of my credit card.

The station was called Gyékényes. It must translates to Middle of Nowhere in Jibberish. Some uniformed police that looked human physically directed us to a wooden bench with a sign POLICIJE above and told us to wait for 10 minutes. We were freezing for more than 20 minutes when I walked to the group of laughing police who looked like they’re doing fellowship, to ask for our passports and what we should do. 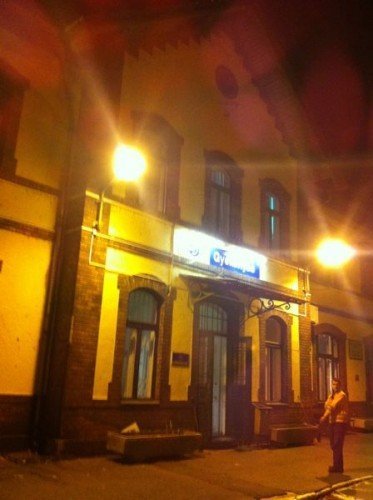 One answered that we should take the taxi to Ljubiana in Slovenia, an EU member country, to catch the same train. It turned out that the train runs from Hungary to Croatia to Slovenia to Italy.

“Take a taxi? How far is it?” We looked around dubiously at the deserted surrounding.

“Or you can take the train tomorrow back to Budapest.”

An old man magically appeared with a map who they introduced as the taxi guy. He explained where we were and that he could drive us to Ljubljana in time to take the same train, for 300 euros. For purpose of reference, 300 euros is their minimum wage monthly salary. This is a f*k’g mafia!

We were discussing back and forth for about 10 minutes, then we went to bargain with him. We’re Asian, we will always try to bargain.

He said, “Now it’s 400euro because you lost time, I have to drive faster.”

Is he fucking kidding? No, he’s not fucking kidding. So it made the decision easy for me. No fucking way! The girls also decided to just take the train to Budapest at 4am. This is obviously a business partnership between the unregistered “taxi” and the border police. We asked if someone gets kicked out every night. One woman nodded yes.

They directed us to a waiting room with few benches and no heating. We had to sleep in this place for the night. When we asked where the toilet was, they were even deliberately being mean by telling us there’s none. Right, there is no toilet in a train station. Fine, we do it in nature. Then he finally showed us one that is at the back of the ticket office, after a few laughed with each other. They’re just assholes like that. The evening before the train incident, I was running late to meet someone for dinner so I took the tram instead of walking. The validating machines in these trams doesn’t always work but there are several machines. I even made the effort of going to a machine in the far end of the tram. One station before my stop, a young chubby woman with short blond hair came over flashing her badge and asked for my ticket. I confidently showed her.

“Sorry, this is the wrong ticket. This is a metro ticket.” She was soft spoken and not rude. Maybe she was nervous.

“No, this here say metro use only.” I looked at it, it didn’t say only.

“Oh, I’m really sorry, because in some cities tickets are interchangeable, buses, trams, metro. I was checked last night and it was

“Every country is different. You have the wrong ticket. You have to pay the fine. I’m sorry.” One of her colleague showed up. A young man with short, dark hair, thin, about 170cm tall. I wish I took picture of them.

“How much is the fine?” I was running late and wanted to leave.

“There’s an atm machine you can get money from your visa.” She suggested helpfully.

I tried to reason out that I’m a tourist, and I leave tomorrow. I didn’t know the system. I wasn’t deliberately cheating since I was actually holding a validated ticket. He said that it’s not their fault the I didn’t familiarize myself with the system. He then offered a “discount” which of course I understood. 6,000ft he said. Unfortunately I do have this money in my wallet. So I just shove it to them and walked away.

I was told that the actual fine is 6,000 and discounted is 3,000. And what’s more? There is only one ticket system for all transport therefore tickets are interchangeable. The 2 young people look between the age of 20-23. I wish I took their photo but I was so frustrated.

The Day after the Train Incident

We set our alarm at 4am but we’re all up before then, if we slept at all. We’re not in the Holiday Inn for sure. 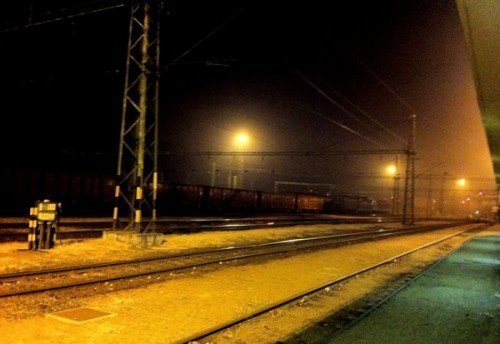 We saw a train and I went to the ticket station to ask if it goes to Budapest. The old lady doesn’t speak English and was grouchy at 4am. She asked for 550ft from us for ticket. We explained we have no more forint and that the police told us the ride back is free. Of course we explained this in English which she didn’t understand exactly but probably guessed that we can’t pay, so she just dismissed us with a wave of her hand and some Hungarian growl.

One of the girls when to ask the driver and surprisingly he was really nice and explained we have to change somewhere to go to Budapest. To be fair, I’ve actually encountered some nice Hungarians during my 5 days and I can tell you exactly how many–6.

After a few stations, the train checker came knocking at our car. He wanted to see our ticket, we showed our ticket to Venice and explained our situation. Of course he didn’t accept it and want us to pay 75 Euros together. We said we have no more Forint and not enough Euros. He said we have to get our bags and off the train. Deja Vu!

Somebody forgot to inform these people we encountered that communism is over in Hungary a long time ago.

We asked to be taken to the next station so we can buy tickets with our credit card. Guess how much our tickets cost? 10 Euros each!

We arrived Budapest-Deli station at 10a.m. First thing we did was go to the MÁV-START Customer Service and relay our predicament the night before. She was helpful but defensive.

We wanted our tickets to be refunded. It’s a breach of contract. They’re supposed to transport us to Venice but they didn’t. She said there’s no way for them to tell if a person needs visa or not. Uh… I suppose they have to hire psychics to sell tickets!

She was shocked with the story of the police have partnership with private car owners. Nobody ever reported such incident before. But she said it’s police business, not theirs.

Their customer service training is very different from one I had. Apart from giving available information (like train schedules and available routes), it’s obviously also to come up with excuses and people or institution to blame instead of coming up with an action plan for problems.

She doesn’t even have to come up with the solution. She only had to make a report and let the upper management do the thinking. And the solution is really just one step: To inform the passenger if the ticket he/she’s buying passes through non-EU country. And that Croatia in particular requires transit visa.

We filed a refund form anyway. Then she told us that there is actually a direct train to Ljubiana and then from Ljubiana can change train to Venice. There would be waiting time in Ljubiana so the whole trip will be 19 hours instead of 14.

No brainer that we would have taken this option the day before. I would have wanted to see a bit of Ljubiana. She said we can buy ticket now and take the train at noon. But we all couldn’t bear the thought of staying a minute longer. So we asked for direction to the airport.